Why I No Longer Have Birth Regret 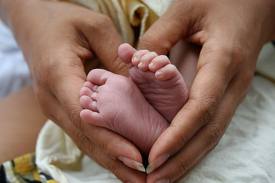 I've had different experiences with different births, and each one has been unique and promoted personal growth.
My first baby's birth was the hardest. I went in naively thinking I could have a medication-free birth in the hospital with very little preparation. I knew my mom gave birth to all six of her babies without medication, and I assumed I'd be able to do the same. I didn't realize how much things had changed in 15 years and I wasn't prepared for the routine interventions that seemed to cascade out of control. My water broke, I was induced to the point that I was begging for medication, got the epidural which led to fetal distress and slow labor, threatened with a cesarean if I didn't progress, and ultimately pushed for almost two hours and was given an episiotomy without my consent.
I was grateful I'd avoided the c-section, but it had been a traumatizing experience. The childbirth classes at the county health department had not prepared me for being bullied and coerced by medical staff to receive interventions I never wanted.
The crazy thing is that I would have gone back to the same obstetrician for my second pregnancy, except that he wouldn't accept my new insurance. I'll be forever grateful for being forced to find a new doctor. I also changed hospitals, which I now realize was a huge step in the right direction. I've since learned that the hospital where my first child was born has the highest intervention rates in the area. It's the best place in the county for premature and sick babies, but the worst for healthy moms and babies and natural birth. I chose a smaller community hospital after that and never went back to the first hospital.
My second baby's birth was a result of me trying to take control of the situation. When my doctor said my cervix was favorable and offered me the option of scheduling an induction I felt like I had power over my baby's birth. I had decided I just couldn't handle birth without pain medication and made peace with the epidural. It was actually a very positive experience for me. Labor was much faster, more than two-thirds shorter than my first labor. I was laughing with my husband and the doctor during labor and pushing, and my son came out with about four pushes. The doctor was gentler than my first OB, and he was more friendly. He didn't cut me, but I tore along my episiotomy scar. My baby latched on while the doctor was stitching me up, and nothing felt rushed or pressured. I think it was exactly the experience I needed at the time.

I stuck with my second OB for the next two births, which were both unmedicated births in the smaller hospital with a doula. My doctor was very supportive of my wishes and so was the hospital. I really think I had the best births I could have had in that setting, with very few interventions. I felt like the hospital staff were just observers and I was doing everything with the support of my husband and my doula.
My fifth baby's birth at home was incredibly healing for me. It had the opposite effect on me than what I'd expected. Instead of becoming further polarized to home birth, I found myself opening up and being more accepting of the different choices women make for birth. I felt that I would personally never step foot in a hospital to give birth again, but I was more understanding of other women who chose differently than I did.
I think that shift happened because I became more at peace with myself. For years I'd been angry with my first obstetrician for the way my first baby's birth played out. Not at first, but as time slowly went by I realized there was a lot of emotional pain from the experience. I felt like everyone around me had been making decisions for me. I had no voice, and when I tried to speak up no one listened. I blamed my doctor for everything that hadn't gone according to my wishes. I had deep regrets, especially after I was finally able to have a natural birth in the hospital and was learning more about physiological birth. If only I'd been able to prepare myself better during my first pregnancy. If only I'd put some thought into which doctor I went to and where I would give birth. If only I'd been smarter, more informed, and not so quick to trust the medical professionals. I blamed myself for not making better decisions and knowing better.
I transferred the pain and blame I felt onto other women who seemed to be making the same mistakes I'd made. I couldn't understand why anyone would knowingly choose a birth full of interventions and I had a sort of self-righteous attitude about it. I felt I knew better, and people should listen to me. I took it personally when they didn't want to listen. I wished I'd had someone to tell me all the things I should have known, and my friends were dismissing this important information without a second thought.
My home birth helped me find inner peace. Somehow through that experience I was finally able to forgive myself. For the first time in nine years I no longer felt angry or pained at the memory of that first traumatic birth.
My inner peace seemed to translate outward toward others. Once I was able to forgive myself for being human and making mistakes I was able to be more genuinely loving and supportive of others who made decisions I wouldn't personally make.
I also realized that each of my birth experiences was a part of my path. When I was pregnant for the first time I wasn't ready for the information I now understand. After the disappointment of my out-of-control first birth I needed to heal, and that took time and experience. Even though it was fully medicated, my second baby's birth was very healing for me at the time. I learned that medicated birth can go smoothly and it's not always a train wreck. Through the births of my third and fourth children I learned about my own power and strength, and I was gradually growing more confident in my body and spirit. I also found great strength and support in my husband and my doula, and it was beautiful to have them to depend on. My natural hospital births gave me the confidence to move forward with a planned home birth. Through my home birth I felt I came full circle and was able to embrace every experience I'd had before that point in time. I also feel the home birth helped prepare me for more things to come, possibly a planned unassisted birth in my future.
One thing I've realized is that people can and do change, and what we each need is loving support for where we are and what we need at the time. I'm glad I didn't have someone screaming in my face telling me what a mistake it was to be asking for an epidural, or how stupid it was to schedule an induction. At those points in time I wouldn't have been able to accept it.
I needed to have these experiences for my personal growth, and I feel it will help me to better support other women in their various pregnancy and birth choices. I understand why women choose interventions because I've been there. I also understand what it's like to experience trauma and regret, and the healing that takes place. I accept that each woman is at a certain place in her path and must make the choices that she feels are best for her and her situation. Understanding my own imperfections helps me to appreciate someone else in her imperfect state. When I think about what I've been through and what has brought me to where I am now, I can more easily accept a woman for who she is today and what she chooses to do.
Posted by Cherylyn at 6:39 AM

My name is Cherylyn

I'm a mother of six, a Birth Doula, and apprentice midwife. I've given birth in the hospital medicated and un-medicated, and at home. I'm passionate about all things related to childbirth and want to share my passion with others.

The Gift of Giving Life

Birth Doulas support women in labor and birth. To learn more about what they do, please check out the DONA International website. You can also find a doula in your area, or locate a doula trainer if you're interested in doing this wonderful work yourself.